From£218.10 OTR
Kia 7 Year Warranty
Low Monthly Rental
Find Out More
We have offers across the range and we are here to help find the best offer for you. We can also tailor a finance solution for you and also organise your part exchange. Please contact us for more information on our great range of offers. Send an Enquiry

The Kia Ceed is the next generation of European hatchback, having been designed, developed, engineered, and built all in Europe.

The Kia Ceed has been engineered exclusively for European roads with European drivers in mind. With new levels of dynamism, driver engagement, noise reduction, and a host of enhanced innovative technologies, the Kia Ceed is built to offer you the driving pleasure you've always sought.

Lower, wider, and with a longer rear overhang than the Second Generation Kia Ceed, the Kia Ceed's silhouette exhibits a more mature sense of athleticism. Straight lines replace the rounded-off edges of its predecessor, evolving the front of the car with a wider ‘tiger-nose’ grille and lower air intake, and precise, linear shapes framing its ‘face’. The new model features ‘ice cube’ LED daytime running lights as standard. 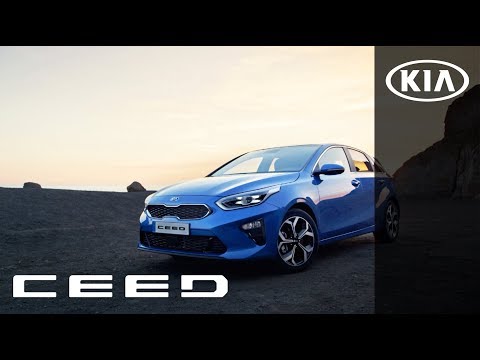 The standard Forward Collision-Avoidance Assist (FCA) detects vehicles in front of you using a camera and radar sensors, warning you visually if a collision risk arises. Opt for the pedestrian protection system* and the steering wheel vibrates if pedestrians enter the road. If you don't react, the car brakes automatically.​

Parallel or perpendicular parking in the Ceed are both made easy with the Smart Park Assist (SPA) system***. Using front, side and rear sensors, it steers the car for you. All you need to do is handle the brake, accelerator and gears. The rear view camera shows dynamic guidelines on the touchscreen, guiding you into place. Finish by activating the electronic parking brake.**​

On cold days, seats in the front and rear heat up quickly, so you keep warm. An Integrated Memory System always knows your favourite driver seat settings. The Kia Ceed also features a heated steering wheel​

Using a combination of a camera and radar, Smart Cruise Control (SCC) with Stop and Go regulates the vehicle's speed and the distance to the car ahead**. If the preceding car speeds up, your Kia Ceed accelerates up to the pre-set speed. If it slows down, your car drops the speed or even stops, to maintain the pre-determined safety distance.​

Relish the tunes you love in excellent sound while out and about in the Kia Ceed. A JBL Premium Sound System, with 8 speakers enhance MP3 quality, emitting high-definition sound throughout your car.**​

The large, high-definition touchscreen uses Bluetooth® multi-connection to let occupants connect two mobile devices at once, as well as Android Auto and Apple CarPlay(1). You can split the screen to use up to three apps, such as map, weather and music(2).

Quality redefined. That’s how we describe our 7 year or 100,000 mile warranty: a unique and clear commitment to ensuring you benefit from the highest standards in car manufacturing. It’s also our commitment to you, demonstrating our confidence of quality in every component and that your Kia will stand the test of time.

Every one of our models is covered with a 7-year manufacturer’s car warranty, you can also pass it on: reselling your Kia within the warranty terms and the new owner will also benefit from the remaining time or mileage. It’s just one of the great benefits of the Kia Promise- giving you greater value for longer.

With Kia you get 7 years of driving pleasure, 7 years of fun, 7 years of adventure, excitement and exhilaration. Not to mention 7 years of lower running costs and 7 years peace of mind...

Free & Fast Online Part Exchange Valuations Interested in selling or part-exchanging? Use our tool to find out what your vehicle is worth. Value Now
Emissions From 99 g/km
Power Up to 201 bhp
Fuel Efficiency Up to 74.3 mpg
Kia Ceed Your Next Steps
Send an Enquiry
Book a Test Drive
Find a Dealer
View All Offers
Back to top
Company Information
Reg Office: Trinity Marina, Coventry Road, Hinckley, Leicestershire, LE10 0NF
Reg. Company Number: 5693106
VAT Reg. No. 881 6690 84
TMS Limited trading as TMS Motor Group is an appointed representative of ITC Compliance Limited which is authorised and regulated by the Financial Conduct Authority (their registration number is 313486). Permitted activities include advising on and arranging general insurance contracts and acting as a credit broker not a lender.
Back
Vehicle Valuation
Compare Saved Vehicles
Top
Close
Your Cookie Settings
Select your cookie settings
Strictly Necessary Strictly Necessary cookies are essential to let you move around the website and use its features, such as accessing secure areas, shopping baskets and online billing. These cookies allow our website to provide services at your request.
Performance Performance cookies collect information about how you use our website e.g. which pages you visit most often, and if you experience any error messages. They also allow us to update our website to improve performance and tailor it to your preferences. These cookies do not collect any information that could identify you - all the information collected is anonymous. They will not be used to target adverts to you on other websites.
Functional Functionality cookies are used to remember the choices you make, e.g. your user name, log in details and language preferences. They also remember any customisations you make to the website to give you enhanced, more personal features.
Targeting Targeting cookies collect information about your browsing habits to deliver adverts which are more relevant to you and your interests. They also measure the effectiveness of advertising campaigns.
Save Settings
Cancel Changes